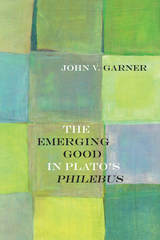 Plato’s Philebus presents a fascinating dialogue between the life of the mind and the life of pleasure. While Socrates decisively prioritizes the life of reason, he also shows that certain pleasures contribute to making the good life good. The Emerging Good in Plato’s "Philebus" argues that the Socratic pleasures of learning emphasize, above all, the importance of being open to change.

John V. Garner convincingly refines previous interpretations and uncovers a profound thesis in the Philebus: genuine learners find value not only in stable being but also in the process of becoming. Further, since genuine learning arises in pluralistic communities where people form and inform one another, those who are truly open to learning are precisely those who actively shape the betterment of humanity.

The Emerging Good in Plato’s "Philebus" thus connects the Philebus’s grand philosophical ideas about the order of values, on the one hand, to its intimate and personal account of the experience of learning, on the other. It shows that this dialogue, while agreeing broadly with themes in more widely studied works by Plato such as the Republic, Gorgias, and Phaedo, also develops a unique way of salvaging the whole of human life, including our ever-changing nature.
AUTHOR BIOGRAPHY
JOHN V. GARNER is an assistant professor of philosophy at the University of West Georgia.
TABLE OF CONTENTS

Chapter 2 - The Mixed Life and its Causes

Part II: Pure Pleasure and Knowledge in the Order of the Good Life

Chapter 4 - Purity and the Sciences

Conclusion: Why Should the Good Come to Be?