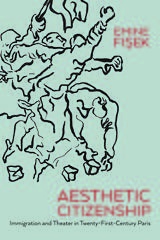 Aesthetic Citizenship is an ethnographic study of the role of theatrical performance in questions regarding immigration, citizenship, and the formation of national identity. Focusing on Paris in the twenty-first century, Emine Fisek analyzes the use of theater by immigrant-rights organizations there and examines the relationship between aesthetic practices and the political personhoods they negotiate.

From neighborhood associations and humanitarian alliances to arts organizations both large and small, Fisek traces how theater has emerged as a practice with the perceived capacity to address questions regarding immigrant rights, integration, and experience. In Aesthetic Citizenship, she explores how the stage, one of France’s most evocative cultural spaces, has come to play a role in contemporary questions about immigration, citizenship and national identity. Yet Fisek’s insightful research also illuminates Paris’s broader historical, political, and cultural through-lines that continue to shape the relationship between theater and migration in France.

By focusing on how French public discourses on immigration are not only rendered meaningful but also inhabited and modified in the context of activist and arts practice, Aesthetic Citizenship seeks to answer the fundamental question: is theater a representational act or can it also be a transformative one?
AUTHOR BIOGRAPHY
EMINE FISEK is an assistant professor in the Department of Western Languages and Literatures at Bogazici University.
TABLE OF CONTENTS