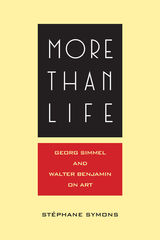 Reading Simmel’s work, particularly his essays on Michelangelo, Rembrandt, and Rodin, alongside Benjamin’s concept of Unscheinbarkeit (inconspicuousness) and his writings on Charlie Chaplin, More Than Life demonstrates that both Simmel and Benjamin conceive of art as the creation of something entirely new rather than as a mimetic reproduction of a given. The two thinkers diverge in that Simmel emphasizes the presence of a continuous movement of life, whereas Benjamin highlights the priority of discontinuous, interruptive moments.

With the aim of further elucidating Simmel and Benjamin’s ideas on art, Stéphane Symons presents a number of in-depth analyses of specific artworks that were not discussed by these authors. Through an insightful examination of both the conceptual affinities and the philosophical differences between Simmel and Benjamin , Symons reconstructs a crucial episode in twentieth-century debates on art and aesthetics.
AUTHOR BIOGRAPHY
STÉPHANE SYMONS is an associate professor at the Institute of Philosophy, KU Leuven, in Leuven, Belgium.
TABLE OF CONTENTS