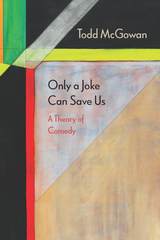 Only a Joke Can Save Us presents an innovative and comprehensive theory of comedy. Using a wealth of examples from high and popular culture and with careful attention to the treatment of humor in philosophy, Todd McGowan locates the universal source of comedy in the interplay of the opposing concepts lack and excess.

After reviewing the treatment of comedy in the work of philosophers as varied as Aristotle, G. W. F. Hegel, Sigmund Freud, Henri Bergson, and Alenka Zupancic, McGowan, working in a psychoanalytic framework, demonstrates that comedy results from the deployment of lack and excess, whether in contrast, juxtaposition, or interplay.

Illustrating the power and flexibility of this framework with analyses of films ranging from Buster Keaton and Marx Brothers classics to Dr. Strangelove and Groundhog Day, McGowan shows how humor can reveal gaps in being and gaps in social order. Scholarly yet lively and readable, Only a Joke Can Save Us is a groundbreaking examination of the enigmatic yet endlessly fascinating experience of humor and comedy.

AUTHOR BIOGRAPHY
TODD MCGOWAN is a professor of film and television studies at the University of Vermont.
TABLE OF CONTENTS