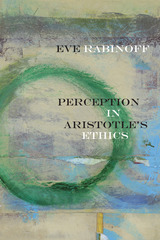 Perception in Aristotle's Ethics seeks to demonstrate that living an ethical life requires a mode of perception that is best called ethical perception. Specifically, drawing primarily on Aristotle’s accounts of perception and ethics in De anima and Nicomachean Ethics, Eve Rabinoff argues that the faculty of perception (aisthesis), which is often thought to be an entirely physical phenomenon, is informed by intellect and has an ethical dimension insofar as it involves the perception of particulars in their ethical significance, as things that are good or bad in themselves and as occasions to act. Further, she contends, virtuous action requires this ethical perception, according to Aristotle, and ethical development consists in the achievement of the harmony of the intellectual and perceptual, rational and nonrational, parts of the soul.

Rabinoff's project is philosophically motivated both by the details of Aristotle’s thought and more generally by an increasing philosophical awareness that the ethical agent is an embodied, situated individual, rather than primarily a disembodied, abstract rational will.
AUTHOR BIOGRAPHY
EVE RABINOFF is an assistant professor of philosophy at the University of Minnesota, Duluth.
TABLE OF CONTENTS