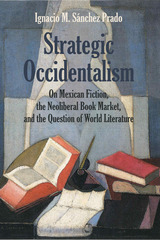 Strategic Occidentalism examines the transformation, in both aesthetics and infrastructure, of Mexican fiction since the late 1970s. During this time a framework has emerged characterized by the corporatization of publishing, a frictional relationship between Mexican literature and global book markets, and the desire of Mexican writers to break from dominant models of national culture.

In the course of this analysis, Ignacio M. Sánchez Prado engages with theories of world literature, proposing that “world literature” is a construction produced at various levels, including the national, that must be studied from its material conditions of production in specific sites. In particular, he argues that Mexican writers have engaged in a “strategic Occidentalism” in which their idiosyncratic connections with world literature have responded to dynamics different from those identified by world-systems or diffusionist theorists.

Strategic Occidentalism identifies three scenes in which a cosmopolitan aesthetics in Mexican world literature has been produced: Sergio Pitol’s translation of Eastern European and marginal British modernist literature; the emergence of the Crack group as a polemic against the legacies of magical realism; and the challenges of writers like Carmen Boullosa, Cristina Rivera Garza, and Ana García Bergua to the roles traditionally assigned to Latin American writers in world literature.
AUTHOR BIOGRAPHY
IGNACIO M. SÁNCHEZ PRADO is a professor of Spanish and Latin American studies at Washington University in St. Louis. He is the author of Screening Neoliberalism: Transforming Mexican Cinema, 1988–2012 and other books, as well as the editor of eleven collections, including (as coeditor) A History of Mexican Literature.
TABLE OF CONTENTS