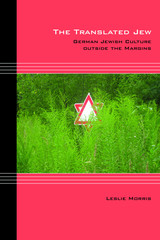 The Translated Jew brings together an eclectic set of literary and visual texts to reimagine the transnational potential for German Jewish culture in the twenty-first century. Departing from scholarship that has located the German Jewish text as an object that can be defined geographically and historically, Leslie Morris challenges national literary historiography and redraws the maps by which transnational Jewish culture and identity must be read.

Morris explores the myriad acts of translation, actual and metaphorical, through which Jewishness leaves its traces, taking as a given the always provisional nature of Jewish text and Jewish language. Although the focus is on contemporary German Jewish literary cultures, The Translated Jew also turns its attention to a number of key visual and architectural projects by American, British, and French artists and writers, including W. G. Sebald, Anne Blonstein, Hélène Cixous, Ulrike Mohr, Daniel Blaufuks, Paul Celan, Raymond Federman, and Rose Ausländer.

In thus realigning German Jewish culture with European and American Jewish culture and post-Holocaust aesthetics, this book explores the circulation of Jewishness between the United States and Europe. The insistence on the polylingualism of any single language and the multidirectionality of Jewishness are at the very center of The Translated Jew.
AUTHOR BIOGRAPHY
LESLIE MORRIS is a professor of German and the director of the Center for Jewish Studies at the University  of Minnesota.
TABLE OF CONTENTS