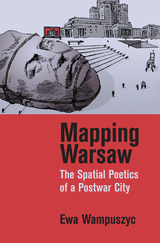 Inspired by the spatial turn in the humanities and social sciences, Mapping Warsaw is an interdisciplinary study that combines urban studies, cinema studies, cultural studies, history, literature, and photography. It examines Warsaw's post-World War II reconstruction through images and language.

Juxtaposing close readings of photo books, socialist-era newsreels called the Polska Kronika Filmowa, the comedies of Leonard Buczkowski and Jan Fethke, the writing and films of Tadeusz Konwicki, and a case study on the Palace of Culture and Science—a "gift" from none other than Stalin—this study investigates the rhetorical and visual, rather than physical, reconstruction of Warsaw in various medias and genres.

Ewa Wampuszyc roots her analysis in the historical context of the postwar decade and shows how and why Poland's capital became an essential part of a propaganda program inspired by communist ideology and the needs of a newly established socialist People's Republic. Mapping Warsaw demonstrates how physical space manifests itself in culture, and how culture, history, and politics leave an indelible mark on places. It points out ways in which we take for granted our perception of space and the meanings we assign to it.
AUTHOR BIOGRAPHY
EWA WAMPUSZYC has taught Polish language, literature, and culture at the University of Florida, the University of Michigan, and the University of North Carolina at Chapel Hill.
TABLE OF CONTENTS
Contents
Acknowledgments
Prologue
Introduction
Chapter 1. Re-creating Warsaw in Photobooks
Chapter 2. Reconstructing Warsaw in Newsreels
Chapter 3. Remapping Warsaw in Cinema
Chapter 4. Reappropriating Warsaw and the Palace of Culture
Afterword
Notes
List of News Segments from the Polish Film Chronicle
Works Cited
Index
REQUEST ACCESSIBLE FILE