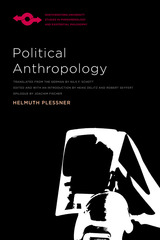 In Political Anthropology (originally published in 1931 as Macht und menschliche Natur), Helmuth Plessner considers whether politics—conceived as the struggle for power between groups, nations, and states—belongs to the essence of the human. Building on and complementing ideas from his Levels of the Organic and the Human (1928), Plessner proposes a genealogy of political life and outlines an anthropological foundation of the political. In critical dialogue with thinkers such as Carl Schmitt, Eric Voegelin, and Martin Heidegger, Plessner argues that the political relationships cultures entertain with one other, their struggle for acknowledgement and assertion, are expressions of certain possibilities of the openness and unfathomability of the human.

Translated into English for the first time, and accompanied by an introduction and an epilogue that situate Plessner's thinking both within the context of Weimar-era German political and social thought and within current debates, this succinct book should be of great interest to philosophers, political theorists, and sociologists interested in questions of power and the foundations of the political.
AUTHOR BIOGRAPHY
HELMUTH PLESSNER (1892 –1985) was a leading figure in the field of philosophical anthropology. He was the author of more than thirteen books, including The Limits of Community: A Critique of Social Radicalism, The Levels of the Organic and the Human, and Laughing and Crying: A Study of the Limits of Human Behavior.

HEIKE DELITZ is a Privatdozent in general sociology and social theory at the University of Bamberg. She is the author of Bergson-Effekte: Aversionen und Attraktionen im französischen soziologischen Denken (The Bergson Effect: Aversions and Attractions in French Sociological Thought).

NILS F. SCHOTT, the James M. Motley Postdoctoral Fellow in the Humanities at Johns Hopkins University, is a widely published translator of work in the humanities, including Vladimir Jankélévitch's Henri Bergson.
TABLE OF CONTENTS

The purpose of this book
1 The naturalistic conception of anthropology and its political ambiguity
The path to political anthropology
2 The universal conception of political anthropology with regard to the human as the historical subject of attribution of its world
3 Should universal anthropology proceed empirically or a priori?
4 Two possible a priori procedures
5 The new possibility of combining the a priori and empirical views according to the principle of the human’s unfathomability
6 Excursus: Dilthey’s idea of a philosophy of life
7 The principle of unfathomability or principle of open questions
8 The human as power
9 The exposure of the human
10 Excursus: Why it is significant for the question of power that the primacy of philosophy or anthropology is undecidable
11 The powerlessness and predictability of the human
12 The human is tied to a people