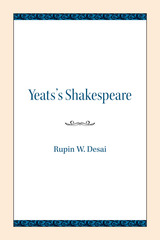 BUY
Yeats's Shakespeare
by Rupin W. Desai
Northwestern University Press, 1971
Paper: 978-0-8101-3828-5
In Yeats's Shakespeare, the first full-length study of Yeats’s interest in Shakespeare, Rupin W. Desai explores how Shakespearean works influenced Yeats’s poetry and mythological drama. Exploring Shakespeare’s sonnets and Yeats’s poetry, Desai illustrates the deep degree to which Yeats identifies with Shakespeare, even to the extent of including some of Shakespeare’s heroes in his own late poetry. Yeats’s Shakespeare also includes an appendix that lists in detail all of Yeats’s references to Shakespeare’s works.
AUTHOR BIOGRAPHY
RUPIN W. DESAI earned his PhD in English literature at Northwestern University, on a Fulbright scholarship. He returned to India where he became a professor of English at Delhi University and the founding editor of the journal Hamlet Studies.
REQUEST ACCESSIBLE FILE