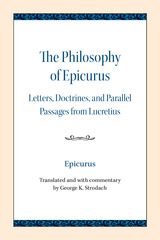 BUY
The Philosophy of Epicurus: Letters, Doctrines, and Parallel Passages from Lucretius
by Epicurus
edited by George K. Strodach
Northwestern University Press, 1963
Paper: 978-0-8101-3872-8
The teachings of Epicurus, whose philosophy focused on the pursuit of happiness, attracted adherents throughout the ancient Mediterranean world and deeply influenced later European thought. The Philosophy of Epicurus contains a long introductory essay on the philosophy of Epicurus and a selection of primary texts. In in George K. Strodach translates excerpts from “The Life of Epicurous” by Diogenes Laertius, letters to Herodotus, Pythocles, and Menoeceus with parallel passages from Lucretius, and the Vatican collection of Epicurus’s aphorisms. These have become the standard English translations of these classic texts that are foundational to Western philosophy.
AUTHOR BIOGRAPHY
GEORGE K. STRODACH (1905-1971) taught language and philosophy at Lafayette College in Easton, Pennsylvania for more than 35 years.
REQUEST ACCESSIBLE FILE