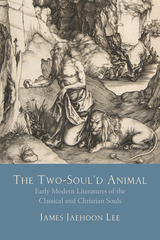 The Two-Soul’d Animal illuminates an early modern debate that recognized the troubling extent to which Christian thought had defined the human in terms of two incompatible models of soul. As the sixteenth century progressed, Christian and humanist thinkers began to realize that these two souls fundamentally contradicted each other. On the one hand, Christian theology had a great debt to Aristotle’s tripartite model of the soul based on three organic faculties: intellection, sensation, and nutrition. On the other, the Christian soul was defined by its immortal, immaterial, and transcendental substance. The sixteenth-century acknowledgement of the two souls provoked a great deal of anxiety, leading Christian thinkers to ask: How can we, as God’s perfect design, have two redundant and yet contradictory souls? And how could the core of the religious subject possibly be defined by a psychological paradox? As a result, the “soul” was an intrinsically unstable term being renegotiated in Renaissance culture.

The English writers studied in The Two-Soul’d Animal place two prevailing interpretations of the soul’s faculties—one rhetorical on the plane of aesthetics, the other theological on the plane of ethics—into contact as a way to construct a new mode of Christian agency.
AUTHOR BIOGRAPHY
JAMES JAEHOON LEE is an assistant professor of digital humanities and early modern literature and culture in the Department of English and Comparative Literature at the University of Cincinnati.
TABLE OF CONTENTS