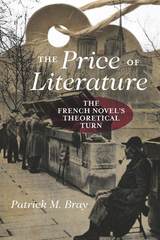 The Price of Literature examines the presence of theory in the nineteenth-century French novel, something Proust likened to leaving a price tag on a gift. Emerging after the French Revolution, what we now call literature was conceived as an art liberated from representational constraints. Patrick M. Bray shows how literature’s freedom to represent anything at all has meant, paradoxically, that it cannot articulate a coherent theory of itself—unless this theory is a necessarily subversive literary representation, or “the novel’s theoretical turn.”

Literary thought, or the theory produced by the text, can only function by exploring what escapes dominant representations. The Price of Literature analyzes how certain iconic texts from the nineteenth century (by Mme de Staël, Hugo, Balzac, Flaubert, and Proust) perform a theoretical turn to claim the freedom to represent anything in the world, but also literature’s ability to transform the world it represents. The conclusion advances a new way of thinking about literary scholarship—one based on how literature redistributes ways of writing by lending form to thought.
AUTHOR BIOGRAPHY
PATRICK M. BRAY is an associate professor in the Department of French and Italian at The Ohio State University and the author of The Novel Map: Space and Subjectivity in Nineteenth-Century French Fiction.
TABLE OF CONTENTS

Chapter Three – Balzac and the Chagrin of Theory

Chapter Five – Having your Cake and Eating It too: Proust’s Aestheticized Thought