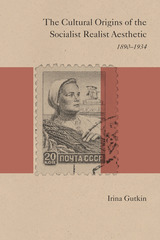 The past fifteen years have seen an important shift in the way scholars look at socialist realism. Where it was seen as a straitjacket imposed by the Stalinist regime, it is now understood to be an aesthetic movement in its own right, one whose internal logic had to be understood if it was to be criticized. International specialists remain divided, however, over the provenance of Soviet aesthetic ideology, particularly over the role of the avant-garde in its emergence.

In The Cultural Origins of the Socialist Realist Aesthetic, Irina Gutkin brings together the best work written on the subject to argue that socialist realism encompassed a philosophical worldview that marked thinking in the USSR on all levels: political, social, and linguistic. Using a wealth of diverse cultural material, Gutkin traces the emergence of the central tenants of socialist realist theory from Symbolism and Futurism through the 1920s and 1930s.
AUTHOR BIOGRAPHY
Gutkin is an assistant professor in the Department of Slavic Languages and Literatures at the University of California, Los Angeles.
TABLE OF CONTENTS