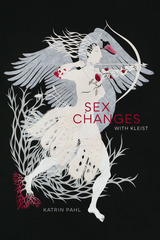 Sex Changes with Kleist analyzes how the dramatist and poet Heinrich von Kleist (1777–1811) responded to the change in the conception of sex and gender that occurred in the eighteenth century. Specifically, Katrin Pahl shows that Kleist resisted the shift from a one-sex to the two-sex and complementary gender system that is still prevalent today. With creative close readings engaging all eight of his plays, Pahl probes Kleist’s appreciation for incoherence, his experimentation with alternative symbolic orders, his provocative understanding of emotion, and his camp humor. Pahl demonstrates that rather than preparing modern homosexuality, Kleist puts an end to modern gender norms even before they take hold and refuses the oppositional organization of sexual desire into homosexual and heterosexual that sprouts from these norms.

Focusing on the theatricality of Kleist’s interventions in the performance of gender, sexuality, and emotion and examining how his dramatic texts unhinge major tenets of classical European theater, Sex Changes with Kleist is vital reading for anyone interested in queer studies, feminist studies, phttp://tme.firebrandtech.com/NUPress/Images/Look/icons/view.pngerformance studies, literary studies, or emotion studies. This book changes our understanding of Kleist and breathes new life into queer thought.
AUTHOR BIOGRAPHY
KATRIN PAHL is an associate professor of German at Johns Hopkins University. She is the author of Tropes of Transport: Hegel and Emotion.
TABLE OF CONTENTS