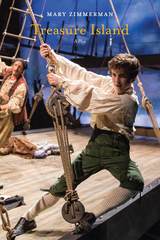 In Treasure Island, Tony Award winner and inventive adapter-director Mary Zimmerman has penned a spirited, energetic adaptation of Robert Louis Stevenson’s most beloved novel, proving again that “a strong story full of larger-than-life characters and the quest for filthy lucre has no age barrier” (Chicago Sun-Times).

Enlivened by rum, mutiny, and buried treasure, Treasure Island is the classic pirates’ tale, widely regarded as the forerunner of this genre. After discovering a treasure map, young Jim Hawkins sets off to sea as cabin boy aboard the Hispaniola, where he encounters one of the most unforgettable characters in literary history—peg-legged buccaneer Long John Silver, a malicious mutineer and charismatic father figure.
AUTHOR BIOGRAPHY
MARY ZIMMERMAN is the recipient of a MacArthur Fellowship, a Tony Award (for Best Director, Metamorphoses), and numerous Jeff Awards. She is the Manilow Resident Director of Goodman Theatre, a member of Lookingglass Theatre Company and a professor of performance studies at Northwestern University. She has also adapted and directed Arabian Nights, Argonautika, Journey to the West, and The Odyssey.
TABLE OF CONTENTS
Contents
A Note on the Play
Production History
Treasure Island
A Note on the Casting
Appendix: Sheet Music
Photographs
REQUEST ACCESSIBLE FILE