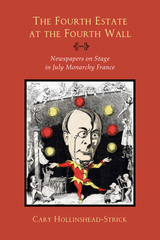 New media are often greeted with suspicion by older media. The Fourth Estate at the Fourth Wall explores how, when the commercial press arrived in France in 1836, popular theater critiqued its corruption, its diluted politics, and its tendency to orient its content toward the lowest common denominator.

July Monarchy plays, which provided affordable entertainment to a broad section of the public, constitute a large, nearly untapped reservoir of commentary on the arrival of the forty-franc press. Vaudevilles and comedies ask whether journalism that benefits from advertisement can be unbiased. Dramas explore whether threatening to spread false news is an acceptable way for journalists to exercise their influence. Hollinshead-Strick uses both plays and novels to show that despite their claims to enlighten their readers, newspapers were often accused of obscuring public access to information. Balzac’s interventions in this media sphere reveal his utopian views on print technology. Nerval’s and Pyat’s demonstrate the nefarious impact that corrupt theater critics could have on authors and on the public alike.

Scholars of press and media studies, French literature, theater, and nineteenth-century literature more generally will find this book a valuable introduction to a cross-genre debate about press publicity that remains surprisingly resonant today.
AUTHOR BIOGRAPHY
CARY HOLLINSHEAD-STRICK is an associate professor of comparative literature and English at the American University of Paris.
TABLE OF CONTENTS