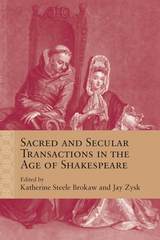 The term “secular” inspires thinking about disenchantment, periodization, modernity, and subjectivity. The essays in Sacred and Secular Transactions in the Age of Shakespeare argue that Shakespeare’s plays present “secularization” not only as a historical narrative of progress but also as a hermeneutic process that unleashes complex and often problematic transactions between sacred and secular. These transactions shape ideas about everything from pastoral government and performative language to wonder and the spatial imagination.

Thinking about Shakespeare and secularization also involves thinking about how to interpret history and temporality in the contexts of Shakespeare’s medieval past, the religious reformations of the sixteenth century, and the critical dispositions that define Shakespeare studies today. These essays reject a necessary opposition between “sacred” and “secular” and instead analyze how such categories intersect. In fresh analyses of plays ranging from Hamlet and The Tempest to All’s Well that Ends Well and All Is True, secularization emerges as an interpretive act that explores the cultural protocols of representation within both Shakespeare’s plays and the critical domains in which they are studied and taught.

The volume’s diverse disciplinary perspectives and theoretical approaches shift our focus from literal religion and doctrinal issues to such aspects of early modern culture as theatrical performance, geography, race, architecture, music, and the visual arts.
AUTHOR BIOGRAPHY
KATHERINE STEELE BROKAW is an associate professor of English at University of California, Merced.

JAY ZYSK is assistant professor of English at University of Massachusetts Dartmouth.
TABLE OF CONTENTS

Wooing Words: Secularizing Language and the Language of Secularism in
Much Ado About Nothing and Romeo and Juliet Tobias Döring

Part Two: Political and Social Secularities
“Of government, the properties to unfold”: Governmentalities in Measure for Measure
Jennifer R. Rust

Toward a Coherent Ideology of Proto-Racism in the Renaissance: Or, the Anachronism of Would-Be Secular Modern Racism Robert Hornback

Part Three: Spaces of the Secular
“Into the Chapel”: Unmodern Interiority and Quintilian Inwardness in Hamlet Jeanne H. McCarthy

Leaving the Place of Conscience in All Is True Rachael Deagman
“In this most desolate isle”: The Tempest and its Sacred Spaces Helga Duncan