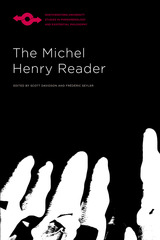 From beginning to end, the philosophy of Michel Henry offers an original and profound reflection on life. Henry challenges the conventional understanding of life as a set of natural processes and a general classification of beings. Maintaining that our access to the meaning of life has been blocked by naturalism as well as by traditional philosophical assumptions, Henry carries out an enterprise that can rightfully be called “radical.” His phenomenology leads back to the original dimension of life—to a reality that precedes and conditions the natural sciences and even objectivity as such.

The Michel Henry Reader is an indispensable resource for those who are approaching Henry for the first time as well as for those who are already familiar with his work. It provides broad coverage of the major themes in his philosophy and new translations of Henry’s most important essays. Sixteen chapters are divided into four parts that demonstrate the profound implications of Henry’s philosophy of life: for phenomenology; for subjectivity; for politics, art, and language; and for ethics and religion.
AUTHOR BIOGRAPHY
MICHEL HENRY (1922–2002) is widely recognized as one of the most important figures in French phenomenology. He is the author of many books, including The Essence of Manifestation, Seeing the Invisible: On Kandinsky, and Incarnation: A Philosophy of Flesh.

SCOTT DAVIDSON is a professor of philosophy at West Virginia University.

FRÉDÉRIC SEYLER is an associate professor of philosophy at DePaul University.
TABLE OF CONTENTS

Part II. Subjectivity
5. The Critique of the Subject
6. Philosophy and Subjectivity
7. Descartes’s Cogito and the Idea of an Ideal Phenomenology
8. Ricoeur and Freud

Part III. Politics, Art, and Language
9. The Concept of Being as Production
10. Difficult Democracy
11. Kandinsky and the Meaning of the Work of Art
12. Material Phenomenology and Language