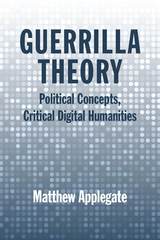 In this penetrating study, Matthew Applegate uses the guerrilla to connect popular iterations of digital humanities’ practice to its political rhetoric and infrastructure. By doing so, he reorients DH’s conceptual lexicon around practices of collective becoming, mediated by claims to conflict, antagonism, and democratic will.

Applegate traces Michael Hardt and Antonio Negri’s radical democratic ingresses into network theory, the guerrilla’s role in its discourse, and concerns for the digital humanities’ own invocation of the figure. The book also connects post- and decolonial, feminist, and Marxist iterations of DH praxis to the aesthetic histories of movements such  as Latin American Third Cinema and the documentary cinema of the Black Panther Party. Concluding with a meditation on contemporary political modalities inherent in DH’s disciplinary expansion, Guerrilla Theory challenges the current political scope of the digital humanities and thus its future institutional impact.
AUTHOR BIOGRAPHY
MATTHEW APPLEGATE is an assistant professor of English and digital humanities and director of the Writing Concentration at Molloy College in New York.
TABLE OF CONTENTS