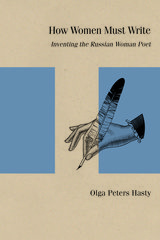 In How Women Must Write, Olga Peters Hasty takes us from an emphatically male Romantic age to a modernist period preoccupied with women’s creativity but also with its containment. In late nineteenth and early twentieth-century Russia, the woman poet was invented: by women poets themselves, by readers who projected gender biases into their poems, and by male poets who wrote posing as women. Examining Karolina Pavlova and Evdokiia Rostopchina, who inspired those writing after them, as well as two women invented by men, Cherubina de Gabriak and Briusov’s Nelli, and challenges to male authority by Marina Tsvetaeva and Anna Akhmatova, this book shows women as purposeful actors realizing themselves creatively and advancing the woman poet’s cause. It will appeal to the general reader and to specialists in Russian literature, women’s studies, and cultural history.
AUTHOR BIOGRAPHY
OLGA PETERS HASTY is a professor in the Department of Slavic Languages and Literatures at Princeton University. She is the author of Pushkin’s Tatiana and Tsvetaeva’s Orphic Journeys in the Worlds of the Word.
TABLE OF CONTENTS