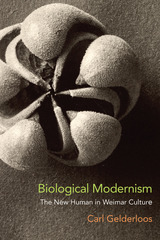 Biological Modernism identifies an intellectual current in the Weimar Republic that drew on biology, organicism, vitalism, and other discourses associated with living nature in order to redefine the human being for a modern, technological age. Contrary to the assumption that any turn toward the organic indicated a reactionary flight from modernity or a longing for wholeness, Carl Gelderloos shows that biology and other discourses of living nature offered a nuanced way of theorizing modernity rather than fleeing from it. Organic life, instead of representing a stabilizing sense of wholeness, by the 1920s had become a scientific, philosophical, and disciplinary problem. In their work, figures such as Alfred Döblin, Ernst Jünger, Helmuth Plessner, and August Sander interrogated the relationships between technology, nature, and the human and radically reconsidered the relationship between the disciplines as well as the  epistemological and political consequences for defining the human being. Biological Modernism will be of interest to scholars of German literature and culture, literary modernism, photography, philosophical anthropology, twentieth-century intellectual history, the politics of culture, and the history of science.