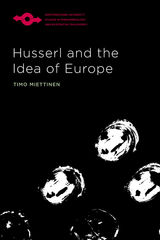 Husserl and the Idea of Europe argues that Edmund Husserl’s late reflections on Europe should not be read either as departures from his early transcendental phenomenology or as simple exercises of cultural criticism but rather as systematic phenomenological reflections on generativity and historicity. Timo Miettinen shows that Husserl’s deliberations on Europe contain his most compelling and radical interpretation of the intersubjective, communal, and historical dimensions of phenomenology.

Husserl and his generation worked in the aftermath of World War I, as Europe struggled to redefine itself, and he penned his late writings as the clouds of World War II gathered. Decades later, the fall of the Soviet Union again altered the continent’s identity and its political and economic divisions. Miettinen writes as a European involved in the question of Europe, and many of the recent authors and critics he addresses in this work—such as Michel Foucault, Jacques Derrida, and Giorgio Agamben—likewise deeply engaged with this new problem of European identity. The book illuminates the multifaceted problem of the idea of European rationality, and it defends novel conceptions of universalism and teleology as necessary components of radical philosophical reflection.

AUTHOR BIOGRAPHY
TIMO MIETTINEN is an adjunct professor at the University of Helsinki.
REQUEST ACCESSIBLE FILE