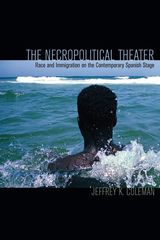 The Necropolitical Theater: Race and Immigration on the Contemporary Spanish Stage demonstrates how theatrical production in Spain since the early 1990s has reflected national anxieties about immigration and race. Jeffrey K. Coleman argues that Spain has developed a “necropolitical theater” that casts the non-European immigrant as fictionalized enemy—one whose nonwhiteness is incompatible with Spanish national identity and therefore poses a threat to the very Europeanness of Spain. The fate of the immigrant in the necropolitical theater is death, either physical or metaphysical, which preserves the status quo and provides catharsis for the spectator faced with the notion of racial diversity. Marginalization, forced assimilation, and physical death are outcomes suffered by Latin American, North African, and sub-Saharan African characters, respectively, and in these differential outcomes determined by skin color
Coleman identifies an inherent racial hierarchy informed by the legacies of colonization and religious intolerance.