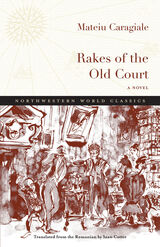 Widely regarded as the greatest Romanian novel of the twentieth century, Mateiu Caragiale’s Rakes of the Old Court (Craii de Curtea-Veche) follows four characters through the bars and brothels of Bucharest. Guided by an amoral opportunist, the shadowy narrator and his two affluent friends drink and gamble their way through a city built on the ruins of crumbled castles and bygone empires. The novel’s shimmering, spectacular prose describes gripping vignettes of love, ambition, and decay.

Originally published in 1929, Rakes of the Old Court is considered a jewel of Romanian modernism. Devoted “Mateists” have long read, memorized, and reenacted the novel, and after the Romanian Revolution, it became part of the high school curriculum. Now canonical, Mateiu’s work has been celebrated for its opulent literary style and enigmatic tone.
AUTHOR BIOGRAPHY
MATEIU CARAGIALE (1885–1936) was a Romanian writer of fiction and poetry. The illegitimate son of prominent playwright Ion Luca Caragiale, Mateiu had a contentious relationship with his family. Heavily influenced by Edgar Allan Poe, his works describe characters of uncertain ancestry, airs of fog and mystery, and plots of decadence and abasement.

SEAN COTTER is a professor of literature and translation studies at the University of Texas at Dallas.
REVIEWS
“In this marvelous classic of Romanian literature, the Rakes take the reader on a journey through the seedy underbelly of a very Balkanic Bucharest in the year 1910, populated by a cast of eccentric characters. A whirlwind of an unparalleled richness of imagery, imagination, and language.” —Jan Willem Bos, translator (into Dutch) of the Orbitor (Blinding) trilogy by Mircea Cartarescu


"These pages taught us all how to write with style in Romanian. Mateiu Caragiale is the absolute master of using the rare word, shining in the sentence here and there, turning the translator’s task into a challenging and valuable effort. Pashadia’s saga is not the description of a road to perdition, but an elegant response to a heritage of shadows and a reality of deceptions. This is a tale about the very soul of an elusive city. Instead of acting on the political stage, Pashadia prefers withdrawing into the landscape of promiscuous nights. The main characters in this novel are accomplices in a hopeless purgatory. Their choices fascinate and intrigue us, and we can see their shadows walking the streets of Bucharest every night." —Bogdan Suceava, author of Coming from an Off-Key Time


“It is a joy to discover that this much loved interwar classic is available in an excellent new English-language translation. Sean Cotter's translation beautifully captures the novel’s atmosphere of hedonism and decay as well as the voices of the ‘rakes’ who strive to find ‘oblivion’ in ‘a life of debauchery.’” —Gabi Reigh, translator of The Town with Acacia Trees by Mihail Sebastian

“In Craii de Curtea Veche Mateiu Caragiale takes us through an intricate labyrinth of nostalgic memories and fantasies of a world that existed primarily as an artifact of the author’s imagination. At the gates of the Levant, the peregrinations of flaneurs through the streets, courtyards, and homes of Bucharest bring into focus a fascinating and dizzying variety of cultural typologies and exchanges. Valued today as an important contribution to modernism in interwar Romania, the novel provides a rich illustration of gender stereotypes and especially self-perceptions of masculinity. Sean Cotter’s translation renders the multiple tropes of deception, self-gratification, and nostalgia deliciously accessible to the English language reader.” —Maria Bucur, author of Gendering Modernism: A Historical Reappraisal of the Canon

"Sean Cotter took up the impossible task of presenting in English the phantasmic magic of Mateiu Caragiale’s Romanian prose, engendered at the seamy border between decadence and civilization in turn-of-the-last-century demimondaine Bucharest, where redolence and stench bind themselves in unsanctioned transactional trysts, where the common currency is the kiss of Judas. We owe him our gratitude." —Julian Semilian, translator of Mircea Cărtărescu's Nostalgia

“A dark nostalgia surrounds the crooked and convoluted characters populating Caragiale’s novel, set in an enthralling and ensnaring fin-de-siecle Bucharest. Caragiale’s poignant story and poetic style come to life in Cotter’s masterful translation. A gorgeous rendition in the English language of one of the key texts of Romanian literature.” —Emanuela Grama, author of Socialist Heritage: The Politics of Past and Place in Romania