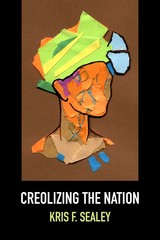 Creolizing the Nation identifies the nation-form as a powerful resource for political struggles against colonialism, racism, and other manifestations of Western hegemony in the Global South even as it acknowledges the homogenizing effects of the politics of nationalism. Drawing on Caribbean, decolonial, and Latina feminist resources, Kris F. Sealey argues that creolization provides a rich theoretical ground for rethinking the nation and deploying its political and cultural apparatus to imagine more just, humane communities.

Analyzing the work of thinkers such as Édouard Glissant, Frantz Fanon, Gloria Anzaldúa, María Lugones, and Mariana Ortega, Sealey shows that a properly creolizing account of the nation provides an alternative imaginary out of which collective political life might be understood. Creolizing practices are always constitutive of anticolonial resistance, and their ongoing negotiations with power should be understood as everyday acts of sabotage. Sealey demonstrates that the conceptual frame of the nation is not fated to re-create colonial instantiations of nationalism but rather can support new possibilities for liberation and justice.

KRIS F. SEALEY is an associate professor of philosophy at Fairfield University and the author of Moments of Disruption: Levinas, Sartre, and the Question of Transcendence.