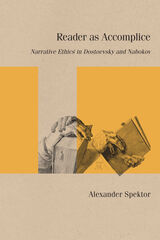 Reader as Accomplice: Narrative Ethics in Dostoevsky and Nabokov argues that Fyodor Dostoevsky and Vladimir Nabokov seek to affect the moral imagination of their readers by linking morally laden plots to the ethical questions raised by narrative fiction at the formal level. By doing so, these two authors ask us to consider and respond to the ethical demands that narrative acts of representation and interpretation place on authors and readers.

Using the lens of narrative ethics, Alexander Spektor brings to light the important, previously unexplored correspondences between Dostoevsky and Nabokov. Ultimately, he argues for a productive comparison of how each writer investigates the ethical costs of narrating oneself and others. He also explores the power dynamics between author, character, narrator, and reader. In his readings of such texts as “The Meek One” and The Idiot by Dostoevsky and Bend Sinister and Despair by Nabokov, Spektor demonstrates that these authors incite the reader’s sense of ethics by exposing the risks but also the possibilities of narrative fiction.

ALEXANDER SPEKTOR is an associate professor of Russian at the University of Georgia.


Introduction. Dostoevsky and Nabokov: The Case for Narrative Ethics
1. Between Sin and Redemption: Narrative as the Conduit for Responsibility in Dostoevsky’s “The Meek One”
2. From Word to Silence: Responding to The Idiot Ethically
3. The Metaphysics of Authorship: Narrative Ethics in Nabokov’s Despair
4. The Dangers of Aesthetic Bliss: The Double Bind of Language in Bend Sinister
Conclusion
Notes
Bibliography
Index