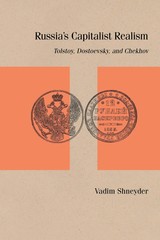 Russia’s Capitalist Realism examines how the literary tradition that produced the great works of Leo Tolstoy, Fyodor Dostoevsky, and Anton Chekhov responded to the dangers and possibilities posed by Russia’s industrial revolution. During Russia’s first tumultuous transition to capitalism, social problems became issues of literary form for writers trying to make sense of economic change. The new environments created by industry, such as giant factories and mills, demanded some kind of response from writers but defied all existing forms of language.

This book recovers the rich and lively public discourse of this volatile historical period, which Tolstoy, Dostoevsky, and Chekhov transformed into some of the world’s greatest works of literature. Russia’s Capitalist Realism will appeal to readers interested in nineteenth-century Russian literature and history, the relationship between capitalism and literary form, and theories of the novel.

VADIM SHNEYDER is an assistant professor in the Department of Slavic, East European and Eurasian Languages and Cultures at the University of California, Los Angeles.


Acknowledgments
Note on the Text
Introduction
1. Industrial Labor and the Limits of Realism
2. The Economies of Anna Karenina
3. Myshkin Among the Merchants: Forms of Money and Narrative Form in The Idiot
4. Heterogeneous Money in The Brothers Karamazov
5. Chekhov and the Naturalization of Capitalism
Conclusion
Bibliography
Notes
Index