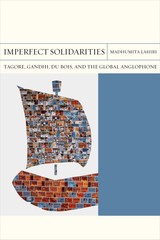 A century ago, activists confronting racism and colonialism—in India, South Africa, and Black America—used print media to connect with one another. Then, as now, the most effective medium for their undertakings was the English language. Imperfect Solidarities: Tagore, Gandhi, Du Bois, and the Global Anglophone tells the story of this interconnected Anglophone world. Through Rabindranath Tagore’s writings on China, Mahatma Gandhi’s recollections of South Africa, and W. E. B. Du Bois’s invocations of India, Madhumita Lahiri theorizes print internationalism. This methodology requires new terms within the worldwide hegemony of the English language (“the global Anglophone”) in order to encourage alternate geographies (such as the Global South) and new collectivities (such as people of color).

The women of print internationalism feature prominently in this account. Sonja Schlesin, born in Moscow, worked with Indians in South Africa. Sister Nivedita, an Irish woman in India, collaborated with a Japanese historian. Jessie Redmon Fauset, an African American, brought the world home to young readers through her work as an author and editor.

Reading across races and regions, genres and genders, Imperfect Solidarities demonstrates the utility of the neologism for postcolonial literary studies.

MADHUMITA LAHIRI is an assistant professor of English at the University of Michigan.