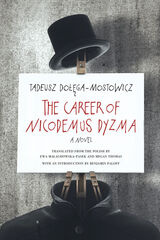 The Career of Nicodemus Dyzma: A Novel
by Tadeusz Dolega-Mostowicz
translated by Ewa Malachowska-Pasek and Megan Thomas
introduction by Benjamin Paloff

Winner of the 2021 Found in Translation Award

First published in Polish in 1932, The Career of Nicodemus Dyzma was Tadeusz Dołęga-Mostowicz’s breakout novel. Dyzma is an unemployed clerk who crashes a swanky party, where he makes an offhand crass remark that sets him on a new course. Soon high society—from government ministers to drug-fueled aristocrats—wants a piece of him. As Dyzma’s status grows, his vulgarity is interpreted as authenticity and strength. He is unable to comprehend complicated political matters, but his cryptic responses are celebrated as wise introspection. His willingness to do anything to hold on to power—flip-flopping on political positions, inventing xenophobic plots, even having enemies assaulted—only leads to greater success.

Dołęga-Mostowicz wrote his novel in a newly independent Poland rampant with political corruption and populist pandering. Jerzy Kosinski borrowed heavily from the novel when he wrote Being There, and readers of both books will recognize similarities between their plots. This biting political satire—by turns hilarious and disturbing, contemptuous and sympathetic—is an indictment of a system in which money and connections matter above all else, bluster and ignorance are valorized, and a deeply incompetent man rises to the highest spheres of government.

TADEUSZ DOLEGA-MOSTOWICZ was born in 1898 and began his writing career as a journalist. Kariera Nikodema Dyzma appeared serially in 1930–31 to great acclaim, establishing his reputation as a novelist. He published prolifically until his death in 1939.

EWA MALACHOWSKA-PASEK is Ladislav Matejka Collegiate Lecturer in Polish and Czech Studies at the University of Michigan.

MEGAN THOMAS is, with Ewa Malachowska-Pasek, the translator of Zofia Nalkowska’s Romance of Teresa Hennert.

BENJAMIN PALOFF is the author of Lost in the Shadow of the Word: Space, Time, and Freedom in Interwar Eastern Europe, also published by Northwestern University Press, and is an associate professor at the University of Michigan.


Foreword by Benjamin Paloff
The Career of Nicodemus Dyzma
Notes