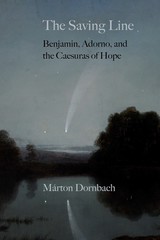 Walter Benjamin and Theodor Adorno both turned to canonical literary narratives to determine why the Enlightenment project was derailed and how this failure might be remedied. The resultant works, Benjamin’s major essay on Goethe’s Elective Affinities and Adorno’s meditation on the Odyssey in Dialectic of Enlightenment, are centrally concerned with the very act of narration. Márton Dornbach’s groundbreaking book reconstructs a hitherto unnoticed, wide-ranging dialogue between these foundational texts of the Frankfurt School.

At the heart of Dornbach’s argument is a critical model that Benjamin built around the concept of caesura, a model Adorno subsequently reworked. Countering an obscurantism that would become complicit in the rise of fascism, the two theorists aligned moments of arrest in narratives mired in unreason. Although this model responded to a specific historical emergency, it can be adapted to identify utopian impulses in a variety of works.

The Saving Line throws fresh light on the intellectual exchange and disagreements between Benjamin and Adorno, the problematic conjunction of secular reason and negative theology in their thinking, and their appropriations of ancient and modern legacies. It will interest scholars of philosophy and literature, critical theory, German Jewish thought, classical reception studies, and narratology.

MÁRTON DORNBACH is a visiting assistant professor and director of undergraduate studies for German at Johns Hopkins University. He is the author of Receptive Spirit: German Idealism and the Dynamics of Cultural Transmission.