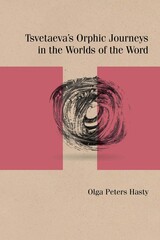 Tsvetaeva’s Orphic Journeys in the Worlds of the Word explores the rich theme of the myth of Orpheus as master narrative for poetic inspiration and creative survival in the life and work of Marina Tsvetaeva. Olga Peters Hasty establishes the basic themes of the Orphic Complex—the poet’s longing to mediate between the embodied physical world and an “elsewhere,” the poet’s inability to do so, the primacy of the voice over the visual world, the insistence on concrete imagery, the costs of the poet’s gift—and orders her arguments in the tragic shape of the Orpheus myth as it worked itself out organically in Tsvetaeva’s own life. Hasty delineates the connections between the Orpheus myth and other key mythological and literary figures in the poet’s life—including Alexander Blok, Anna Akhmatova, Alexander Pushkin, and Rainer Maria Rilke—to make an important and original critical contribution.

AUTHOR BIOGRAPHY
OLGA PETERS HASTY is a professor in the Department of Slavic Languages and Literatures at Princeton University. She is the author of Pushkin’s Tatiana and How Women Must Write.
REVIEWS
“Olga Peters Hasty clarifies as never before the substance of Tsvetaeva’s romanticism—a philosophical concern with poetry as a bridge to a higher realm of experience, and a typological style of thinking inspired by folklore and myth. The book thus renders a double service to Tsvetaeva scholarship, both illuminating Tsvetaeva’s creative philosophy and helping to define her place in the romantic tradition . . . Hasty has traced the logic of Tsvetaeva’s thinking with impressive nuance and clarity.” —Catherine Ciepiela, Slavic Review


"Olga Peters Hasty's recent book is a rare treat: articulate, learned, and sensitive . . . Hasty's admirable talent—obviously informed by a keen poetic ear and a penetrating knowledge of the Russian language—for uncovering unexpected paranomastic echoes and shimmering linguistic ambiguities in her close readings of Tsvetaeva's poetry is [an] indubitable merit of her work." —Alyssa W. Dinega, Slavic and East European Journal