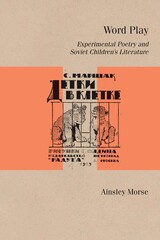 Word Play traces the history of the relationship between experimental aesthetics and Soviet children’s books, a relationship that persisted over the seventy years of the Soviet Union’s existence. From the earliest days of the Soviet project, children’s literature was taken unusually seriously—its quality and subject matter were issues of grave political significance. Yet, it was often written and illustrated by experimental writers and artists who found the childlike aesthetic congenial to their experiments in primitivism, minimalism, and other avant-garde trends. In the more repressive environment following Stalin’s rise to power, experimental aesthetics were largely relegated to unofficial and underground literature, but unofficial writers continued to author children’s books, which were often more appealing than adult literature of the time.

Word Play focuses on poetry as the primary genre for both children’s and unofficial literature throughout the Soviet period. Five case studies feature poets-cum-children’s writers—Leonid Aronzon, Oleg Grigoriev, Igor Kholin, Vsevolod Nekrasov, and Dmitri Prigov—whose unpublished work was not written for children but features lexical and formal elements, abundant humor, and childlike lyric speakers that are aspects of the childlike aesthetic. The book concludes with an exploration of the legacy of this aesthetic in Russian poetry today. Drawing on rich primary sources, Word Play joins a growing literature on Russian children’s books, connecting them to avant-garde poetics in fresh, surprising ways.

AUTHOR BIOGRAPHY
AINSLEY MORSE is an assistant professor of Russian at Dartmouth College.
TABLE OF CONTENTS