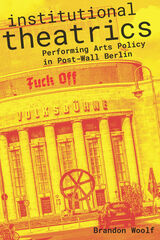 Since the fall of the Berlin Wall, political and economic agendas in the reunified German capital have worked to dismantle long-standing traditions of state-subsidized theater even as the city has redefined itself as a global arts epicenter. Institutional Theatrics charts the ways theater artists have responded to these shifts and crises both on- and offstage, offering a method for rethinking the theater as a vital public institution.

What is the future of the German theater, grounded historically in large ensembles, extensive repertoires, and auteur directors? Examining the restructuring of Berlin’s theatrical landscape and most prominent performance venues, Brandon Woolf argues that cultural policy is not simply the delegation and distribution of funds. Instead, policy should be thought of as an artistic practice of institutional imagination. Woolf demonstrates how performance can critique its patron institutions in order to transform the relations between the stage and the state, between the theater and the infrastructures of its support. Bold, nuanced, and rigorously documented, Institutional Theatrics offers new insights about art, its administration, and the forces that influence cultural production.
AUTHOR BIOGRAPHY
BRANDON WOOLF is a theater artist and clinical associate professor at New York University, where he directs the Program in Dramatic Literature.
TABLE OF CONTENTS