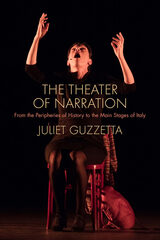 This book examines the theater of narration, an Italian performance genre and aesthetic that revisits historical events of national importance from local perspectives, drawing on the rich relationship between personal experiences and historical accounts. Incorporating original research from the private archives of leading narrators—artists who write and perform their work—Juliet Guzzetta argues that the practice teaches audiences how ordinary people aren’t simply witnesses to history but participants in its creation.

The theater of narration emerged in Italy during the labor and student protests, domestic terrorism, and social progress of the 1970s. Developing Dario Fo and Franca Rame’s style of political theater, influenced by Jerzy Grotowski and Bertolt Brecht, and following in the freewheeling actor-author traditions of the commedia dell’arte, narrators created a new form of popular theater that grew in prominence in the 1990s and continues to gain recognition. Guzzetta traces the history of the theater of narration, contextualizing its origins—both political and intellectual—and centers the contributions of Teatro Settimo, a performance group overlooked in previous studies. She also examines the genre’s experiments in television and media.

The first full-length book in English on the subject, The Theater of Narration leverages close readings and a wealth of primary sources to examine the techniques used by narrators to remake history—a process that reveals the ways in which history itself is a theater of narration.
AUTHOR BIOGRAPHY
JULIET GUZZETTA is an assistant professor with joint appointments in the Department of English and the Department of Romance and Classical Studies at Michigan State University.
TABLE OF CONTENTS


Acknowledgments
Introduction: The Past and the Players
1. Origins of a Practice
2. The Cultural Laborer
3. A Language of One's Own
4. Locating Community
5. Experiments with Media
Conclusion: Politicizing History
Notes
Bibliography
Index