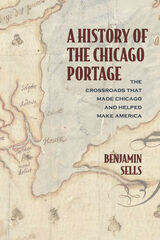 Seven muddy miles transformed a region and a nation

This fascinating account explores the significance of the Chicago Portage, one of the most important—and neglected—sites in early US history. A seven-mile-long strip of marsh connecting the Chicago and Des Plaines Rivers, the portage was inhabited by the earliest indigenous people in the Midwest and served as a major trade route for Native American tribes. A link between the Mississippi River and the Atlantic Ocean, the Chicago Portage was a geopolitically significant resource that the French, British, and US governments jockeyed to control. Later, it became a template for some of the most significant waterways created in the nineteenth and twentieth centuries. The portage gave Chicago its name and spurred the city’s success—and is the reason why the metropolis is located in Illinois, not Wisconsin.

A History of the Chicago Portage: The Crossroads That Made Chicago and Helped Make America is the definitive story of a national landmark.
AUTHOR BIOGRAPHY
BENJAMIN SELLS is the author of the The Tunnel under the Lake: The Engineering Marvel That Saved Chicago, also published by Northwestern University Press. His other books include The Soul of the Law, which was recently reissued in a twentieth‑anniversary edition; The Essentials of Style: A Handbook for Seeing and Being Seen; Order in the Court: Crafting a More Just World in Lawless Times; and The Soul of Sailing.
REVIEWS
“A History of the Chicago Portage is an important resource for anyone interested in the development of the region. It tells the fascinating story of the waterway that made Chicago possible. Meticulously researched and illustrated . . . this study details the portage’s importance in history providing a key to the continent and unlocking the vast resources of the Midwest.” —Dominic A. Pacyga, author of Chicago: A Biography

“The definitive, comprehensive, and compelling story of a national American landmark, A History of the Chicago Portage: The Crossroads That Made Chicago and Helped Make America is a unique, extraordinary, and unreservedly recommended addition to community, college, and university library American History collections and supplemental study curriculums.” —Midwest Book Review


"Benjamin Sells offers a lively and wide-ranging account of the history of the Chicago Portage from the time of the glaciers to the present. He makes clear that no place is as significant to our understanding the history of this region and that more attention should be given to the Chicago Portage National Historic Site." —Ann Durkin Keating, author of The World of Juliette Kinzie: Chicago Before the Fire


“There is a place for this book on the Chicago History shelf.” —Theodore Karamanski, author of Civil War Chicago: Eyewitness to History

“The Chicago Portage has been all but obliterated by the city it made possible. Knitting together many threads of research, this book reconstructs the portage from its geological beginnings, taking the reader on a fascinating journey alongside Native Americans; fur traders; Marquette, Jolliet, and LaSalle; and Chicago’s first settlers.” —Libby Hill, author of The Chicago River: A Natural and Unnatural History


Introduction: Key to the Continent
1. From Glaciers to Industrious Beavers
2. Prehistoric Chicago
3. Commerce and the Cross
4. The Eighteenth-Century Background
5. Fort Dearborn
6. The Métis Effect
7. Chicago, Wisconsin?
8. The Portage in Transition
9. The Coming of the Canal
10. Where was the Chicago Portage?
11. “A History of Chicanery”
12. The Past and Future of a National Historic Site
Epilogue: The Past Imbedded
Acknowledgments
Appendix
Bibliography
Notes
Index