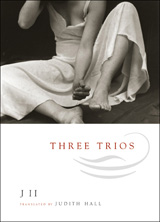 Three Trios brings together, for the first time, translations of two ancient texts. The Apocryphal Book of Judith may be the more familiar one--the tale of a widow as warrior-savior. Less familiar may be the possibility that hidden within this narrative is another older sequence, a pagan one. The ritual that initiated a woman into the Dionysian also licensed her to leave her community. That ceremony, for all the running and blood-letting, helped the cultivated woman cultivate her individuation out of a morass of femininity. The "Mysteries" were widely practiced, and yet to preserve their secrecy, any documentary evidence was surely hidden, coded, or bowdlerized. It is possible that the Book of Judith was such a disguised book of common pagan prayer. Three Trios is composed out of this audacious possibility.
AUTHOR BIOGRAPHY
J II (? - 561? B.C.E.) is the name given to the author of the Apocryphal Book of Judith. Until the discoveries of 1897, many readers attributed to J II the glories of her heroine: her incredible eloquence, intelligence, and the kind of charisma reserved for a god. They did not, for reasons lost to us, go on to attribute to J II her beautiful young heroine's military success: that she entered a wilderness, that she killed her enemy, that she defended her city and saved her people. Centuries after Judith was removed from the Bible, J II was still revered as the maker of this woman, this symbol of Israel. Once the second scroll was found in 1932, her "identity," beyond the simple fact of a woman writing, seemed less certain. Her most beloved poems are probably not the private yearnings of a solitaire but part of a ceremony for cultivated women.

Judith Hall is the author of five books of poetry, including, most recently, Poetry Forum (Bayeux Arts, 2006), and The Promised Folly (TriQuarterly Books/Northwestern, 2003). Her translations of J II are as vivid and imaginative as the poet is imaginary. She serves as poetry editor of The Antioch Review and teaches at California Institute of Technology and with the MFA in Poetry Program at New England College.
REVIEWS

"Each book of Judith Hall's has been a happy discovery for me. Each one has been astonishing, the writing like that of no one else; elegant, resonant, a bright surfacing from the depths of language, experience, and imagination, all conveyed with a sure, original artistry. Three Trios continues the promise of her earlier books and expands her range." --W. S. Merwin