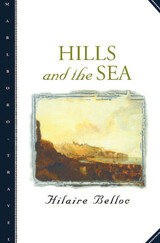 Hills and the Sea
by Hilaire Belloc
Northwestern University Press, 1996
Paper: 978-0-8101-6009-5
Hills and the Sea, first published in 1906 to critical acclaim, collects thirty-eight of Hilaire Belloc's essays, spanning several periods of time and travel. The New York Times noted, "[This] book abounds in sweetness and light, and one must be something more than human or something less not to find therein some congenial and sympathetic message--possibly many."

Belloc captures the essence of each place he visits--whether on the gloomy English fens, or the sunny Provence and Languedoc regions of France, or navigating the North Sea in a leaky boat. Praised for his blend of wit and philosophy, Belloc also weaves together fantasy and fact, producing portraits that take on mythic proportions.
AUTHOR BIOGRAPHY
Joseph Hilaire Pierre René Belloc (27 July 1870 – 16 July 1953) was an Anglo-French writer and historian who became a naturalised British subject in 1902. He was one of the most prolific writers in England during the early twentieth century. He was known as a writer, orator, poet, satirist, man of letters and political activist. He is most notable for his Catholic faith, which had a strong impact on most of his works and his writing collaboration with G. K. Chesterton. He was President of the Oxford Union and later MP for Salford from 1906 to 1910. He was a noted disputant, with a number of long-running feuds, but also widely regarded as a humane and sympathetic man.
TABLE OF CONTENTS