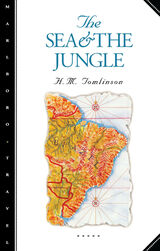 Henry Major Tomlinson (21 June 1873 – 5 February 1958) was a British writer and journalist. He was known for anti-war and travel writing, novels and short stories, especially of life at sea.