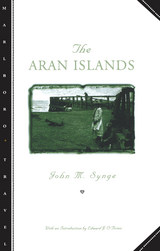 The Aran Islands
by John M. Synge
Northwestern University Press, 1999
Paper: 978-0-8101-6024-8
In the late 1890s, John Synge, in his middle twenties and unsure of his vocation, made his way to Paris to study French literature and become a literary critic. There he met William Butler Yeats. The eminent poet advised Synge to drop his involvement with fin de siècle French authors, return to Ireland, and describe a society with which he had a natural connection.