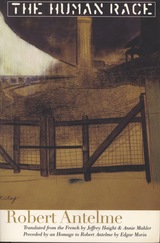 Arrested by the Gestapo and deported to Dachau, Robert Antelme recovered his freedom a year later when François Mitterand, visiting the camp in an official capacity, recognized the dying Antelme and had him spirited to Paris. Antelme's story of his experiences in Germany--his only book--indelibly marked an entire generation, "a work written without hatred, a work of boundless compassion such as that is to be found only in the great Russians."
AUTHOR BIOGRAPHY
Robert Antelme was 26 years old when, in 1943, he joined a French Resistance unit in Paris headed by Francois Mitterand. The Human Race was his sole publication. He died in 1990.
REVIEWS
"[Antelme's] grave and moving plea, not for retribution but for understanding, is reinforced by his endurance . . . human dignity in a nutshell." --New York Times Book Review