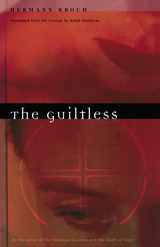 The Guiltless
by Hermann Broch and Michael Hathaway
translated by Ralph Manheim
Northwestern University Press, 2001
Paper: 978-0-8101-6078-1
Murder, lust, shame, hypocrisy, and suicide are at the center of The Guiltless, Hermann Broch's postwar novel about the disintegration of European society in the decades preceding the Second World War. Broch's characters--apathetic, cruel, or indolent--are trapped in their indifference, prisoners of a "wakeful somnolence." They may mention the "imbecile Hitler," yet they prefer sex or a nap to any social action. Broch thought such ethical perversity and political apathy paved the way for Nazism and hoped that by revealing Germany's underlying guilt he could purge indifference from his own and future generations. In The Guiltless, Broch captures how ennui--a very human failing--evolves into something dehumanizing and dangerous.
AUTHOR BIOGRAPHY
Hermann Broch (1886-1951) had careers as a mathematician, engineer, and director of a Viennese textile firm before publishing his first work, the trilogy Sleepwalkers, in 1930-32. In 1935 he spent 5 months in a Nazi prison; in 1940 he emigrated to the U.S.

How The Guiltless Came into Being