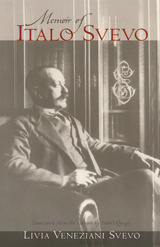 Writer Italo Svevo had many things in common with other writers: a long struggle for recognition; a friendship with a noteworthy author (in Svevo's case, James Joyce); and a long list of neuroses. His choice of a wife, however, was anything but common. Livia Veneziani Svevo tirelessly worked on her husband's behalf after his tragic early death and also penned this remarkable portrait of a serious artist and a loving (if quirky) marriage. Memoir of Italo Svevo tells the story of how a successful middle-aged businessman, as obsessed with smoking as with his abandoned literary ambitions, somehow became one of the great authors of the twentieth century.
AUTHOR BIOGRAPHY
Livia Veneziani Svevo was born in 1874 to a family of middle-class Catholics. After a childhood spent partly in Marseilles, she returned to Trieste with her family in 1885. At age eighteen she struck up a friendship with a distant Jewish cousin named Ettore Schmitz (Italo Svevo), a bank employee and would-be writer thirteen years her senior. They married in 1896. Declared a Jew under Italian racial laws, she fled Trieste during World War II and wrote Memoir of Italo Svevo while in hiding.
TABLE OF CONTENTS