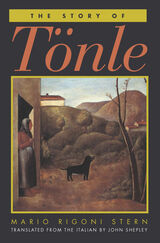 Tönle Bintarn's story takes place in the Veneto region, which once bordered the Austro-Hungarian Empire and where smuggling provided a means of subsistence to the peasants. Having run afoul of revenue agents, Tönle must seek refuge beyond the frontier in Central Europe, where year after year he survives by doing odd jobs and working as an itinerant print peddler, a horse trainer, and a gardener. When he is pardoned he returns home for good to find his children are grown and nothing remains for him but to tend his sheep, while around him Europe spins toward the catastrophe of the Great War--the conflict that will destroy Veneto's unique way of life.
REVIEWS
"A touching novel that trumpets the eternal values of roots, endurance, and family." --Booklist
— -