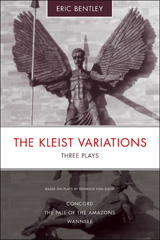 In this collection, Eric Bentley presents Concord, a comedy adapted from Kleist's The Broken Jug;The Fall of the Amazons, a tragedy written in response to Kleist's Penthesilea; and Wannsee, a tragic-comedy which is Bentley's rendering of Kleist's Cathy of Heilbronn.

Bentley sets Concord in a courthouse during the early days of the Republic. Convened to discover who broke an irreplaceable jug symbolic of the chivalric age of Sir Walter Raleigh, Judge Adam's madcap court flounders in hilarious chaos induced by huge lies to cover comic lust.

Fall of the Amazons is the story of Achilles and the Amazon queen, Penthesilea. Through this pagan play, Bentley explores improbably love, which he exemplifies in the biblical story of Abraham and Isaac: "In seeming to be cruel to both father and son, God has enabled them to find, in total vulnerability, total love," a theme that also pervades Wannsee.

Bentley's Wannsee is a play of pageantry: emperors, counts, dueling knights, a young beauty of seemingly low birth, cherubs, and witches masked in loveliness. A fabulous love story ostensibly designed to dissuade Kleist from self-destruction, Wannsee demonstrates with a flourish that, though devils roam the earth, there are also angels.
AUTHOR BIOGRAPHY
Eric Bentley was born in England in 1916 and became an American citizen in 1948. He has earned a reputation as a scholar, teacher, professional theatre critic, performer, and a playwright.
REVIEWS

"The name Eric Bentley is enough to guarantee the significance of any book of or about the drama." --Robert Penn Warren


Worship: Its Wonder and Guises

Concord
Preface: In the Matter of Heinrich von Kleist
The Play

The Fall of the Amazons
Preface: On Hating the Other Sex
The Play

Wannsee
Preface: On Hoping Against Hope
The Play

Afterword: In the Matter of Eric Bentley