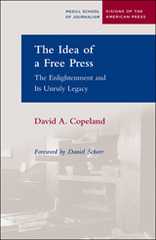 With the introduction of the printing press in England in 1476, a struggle over its control--and its potential for interrupting power--was joined. The written word, once the domain of the upper levels of society that controlled politics, economics, and religion, could be seen passing into the hands of anyone throughout the social strata who wished to voice opinions on any topic of interest or importance. How the advent of printing led to the idea of a free press is the story told by David Copeland in this book, which traces a confrontation that began with issues of religion and gradually expanded into the realm of political freedom.

The rise of a free press was, in many ways, a legacy of the Reformation and Enlightenment. Copeland describes a discourse centered on questions of religion--a discussion that the government, with all its religious authority, could not suppress because of the belief that the ability to reason for oneself was God-given. In this account we see how the debate moved from religion to the purely political sphere, and how, through the increased use of the printing press, it was opened to a multiplicity of voices and opinions. Spanning nearly four centuries in Britain and America, Copeland's book reveals how the tension between government control and the right to debate public affairs openly ultimately led to the idea of a free press; in doing so, it documents an intellectual development of unparalleled relevance and importance to the history of journalism.
AUTHOR BIOGRAPHY
David A. Copeland is the A. J. Fletcher Professor in the School of Communications at Elon University in North Carolina and the author of many works including The Antebellum Era (Greenwood Press, 2003) and, with Shannon E. Martin, The Function of Newspapers in Society: A Global Perspective (Praeger Publications, 2003) Author lives in Elon, NC.
REVIEWS

"Copeland's book makes a valuable contribution to our understanding of the evolution of press freedom and why it is one of our most cherished--and threatened--freedoms." —Journal of Mass Media Ethics

"Copeland's contribution to the history of free expression is complexity in its simplest form." —American Journalism