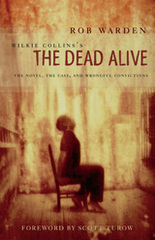 Wilkie Collins's The Dead Alive: The Novel, the Case, and Wrongful Convictions
edited by Rob Warden
by Wilkie Collins
foreword by Scott Turow

On the evidence of The Dead Alive, Scott Turow writes in his foreword that Wilkie Collins might well be the first author of a legal thriller. Here is the lawyer out of sorts with his profession; the legal process gone awry; even a touch of romance to soften the rigors of the law. And here, too, recast as fiction, is the United States' first documented wrongful conviction case. Side by side with the novel, this book presents the real-life legal thriller Collins used as his model-the story of two brothers, Jesse and Stephen Boorn, sentenced to death in Vermont in 1819 for the murder of their brother-in-law, and belatedly exonerated when their "victim" showed up alive and well in New Jersey in 1820.

Rob Warden, one of the nation's most eloquent and effective advocates for the wrongly convicted, reconsiders the facts of the Boorn case for what they can tell us about the systemic flaws that produced this first known miscarriage of justice-flaws that continue to riddle our system of justice today. A tale of false confessions and jailhouse snitches, of evidence overlooked, and justice more blinkered than blind, the Boorns' story reminds us of the perennial nature of the errors at the heart of American jurisprudence-and of the need to question and correct a system that regularly condemns the innocent.
AUTHOR BIOGRAPHY
Wilkie Collins (1824-1889) was a prominent Victorian novelist and the leading mystery writer of his time. His best known works are The Woman in White (1860) and The Moonstone (1867).

Rob Warden is executive director of the Center on Wrongful Convictions, Bluhm Legal Clinic, Northwestern University School of Law. He is the co-author with David Protess of A Promise of Justice (Hyperion, 1998) and Gone in the Night (Dell, 1995).

Scott Turow is a lawyer and author based in Chicago.
TABLE OF CONTENTS