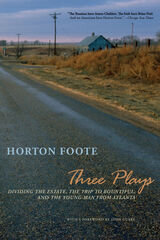 Bringing together the rich characters and wry humor of a celebrated Texas scribe, this book collects three of Foote's most recognized plays. In these works, Foote deftly combines the claustrophobia of the Southern families from Tennessee Williams, the physical and psychological dysfunctions of Eugene O'Neill's families, and the humor and pathos of small town Southern life portrayed by Flannery O'Connor.

In the dark comedy Dividing the Estate, matriarch Stella Gordon is dead set against the parceling out of her clan's land despite the financial woes brought on by the oil bust of the 1980s. In the course of the play, the power of petty self-interest and long-held resentments makes even painful compromise an elusive goal. Widely acclaimed in a 2007 production at Primary Stages, the play will open on Broadway in November 2008.

In The Trip to Bountiful, Carrie Watts is determined to escape a cramped, unpleasant life in a small Houston apartment with her son and avaricious daughter-in-law. Her burning desire is to return to the now desolate town of her childhood, against the inexorability of change and the refuge of memory. Foote earned an Oscar nomination for Best Adapted Screenplay in 1985 for his work on Bountiful.

The Pulitzer Prize-winning The Young Man from Atlanta tells the story of a couple living in Houston in 1950, suffering the aftershocks of the mysterious death of their son. Will and Lily Dale Kidder try to hold onto their beliefs about their son's life and death and the possibilities for their own lives, but both are dealt a shattering blow by the young man of the title, a friend of their son's who never appears in the play.

Foote's pitch-perfect characters and sensitive eye for interpersonal relationships continue to place him at the top of playwrights working today. This new collection brings his best to new audiences.
AUTHOR BIOGRAPHY

Two-time Academy Award–winning writer Horton Foote (b. 1916) has brought the characters and locales of southeastern Texas to the stage, television, and the big screen since his career began in the early 1940s. He is the author of many plays, including Talking Pictures, The Carpetbagger’s Children, Night Season, The Traveling Lady, Convicts, Courtship, l9l8, Lily Dale, and more than twenty one-acts plays. In December 2000, President Clinton awarded Mr. Foote the National Medal of Arts. Foote lives in Wharton, Texas, which, under the name of Harrison, is the setting for many of his plays.

John Guare is an Obie and Tony Award–winning playwright.

"Foote, whose upbringing in a small Texas t