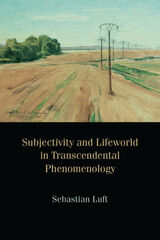 Subjectivity and Lifeworld in Transcendental Phenomenology contributes to discussions about Edmund Husserl’s phenomenology in light of the ongoing publication of his manuscripts. It accounts for the historical origins and influence of the phenomenological project by articulating Husserl's relationship to authors who came before and after him. Finally, it argues for the viability of the phenomenological project as conceived by Husserl in his later years, showing that Husserlian phenomenology is not exhausted in its early, Cartesian perspective, which is indeed its weakest and most vulnerable perspective. Rather, Sebastian Luft convincingly argues, Husserlian phenomenology is a robust and philosophically necessary approach when considered from its late, hermeneutic perspective.

The key point Luft brings into focus is that Husserl's hermeneutic phenomenology is distinct from other hermeneutic philosophers', namely Ernst Cassirer, Martin Heidegger, and Hans-Georg Gadamer. Unlike them, Husserl's focus centers on the work subjects must do in order to uncover the prejudices that guide their unreflective relationship to the world. Luft also demonstrates that there is a deep consistency within Husserl's own writings—from early to late—around the guiding themes of the natural attitude, the need and function of the epoché, and the split between egos, where the transcendental self (distinct from the natural self) is seen as the fundamental ability we all have to inquire into the genesis of our tradition-laden attitudes toward the world.
AUTHOR BIOGRAPHY
SEBASTIAN LUFT is a professor of philosophy at Marquette University.
TABLE OF CONTENTS

PART II. HUSSERL, KANT, AND NEO-KANTIANISM: FROM SUBJECTIVITY TO LIFEWORLD AS A WORLD OF CULTURE
Chapter 7. From Being to Givenness and Back: Some Remarks on the Meaning of Transcendental Idealism in Kant and Husserl
Chapter 8. Reconstruction and Reduction: Natorp and Husserl on Method and the Question of Subjectivity
Chapter 9. A Hermeneutic Phenomenology of Subjective and Objective Spirit: Husserl, Natorp, and Cassirer
Chapter 10. Cassirer's Philosophy of Symbolic Forms: Between Reason and Relativism. A Critical Appraisal

PART III. TOWARDS AN HUSSERLIAN HERMENEUTICS
Chapter 11. The Subjectivity of Effective Consciousness and the Suppressed Husserlian Elements in Gadamer's Hermeneutics
Chapter 12. Husserl's "Hermeneutical Phenomenology" as a Philosophy of Culture