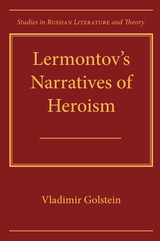 This is the first study of Russian writer Mikhail Lermontov (1814-41) that attempts to integrate the in-depth interpretations of all his major texts--including his famous A Hero of Our Time, the novel that laid the foundation for the Russian psychological novel.

Lermontov's explorations of the virtues and limitations of heroic, self-reliant conduct have subsequently become obscured or misread. This new book focuses upon the peculiar, disturbing, and arguably most central feature of Russian culture: its suspicion of and hostility toward individual achievement and self-assertion. The analysis and interpretation of Lermontov's texts enables Golstein to address broader cultural issues by exploring the reasons behind the persistent misreading of Lermontov's major works and by investigating the cultural attitudes that shaped Russia's reaction to the challenges of modernity.
AUTHOR BIOGRAPHY
Vladimir Golstein is an Associate Professor of Languages at Brown University.
TABLE OF CONTENTS


Acknowledgments
Chapter One. Heroism and Individualism: The Russian Context
Chapter Two. "The Demon": How Not to Regain Paradise Lost
Chapter Three. The Hero and the Masquerade: Temptations of a Gnostic Outlook
Chapter Four. The Enigma of Heroism in Lermontov's "The Song of Tsar Ivan Vassilyevich, His Young Oprichnik, and the Stout-hearted Merchant Kalashnikov"
Chapter Five. Futile, Fatal, or Heroic: Pechorin in "The Fatalist"
Chapter Six. Lermontov versus Marlinsky: or, Why Grushnitsky Had to Be Thrown off the Cliff
Chapter Seven. Mtsyri's Refusals: The Making of Lermontov's Paradoxical Hero
Afterword. "The Man That Hath No Music in Himself . . ."
Notes
Selected Bibliography
Index